Australopithecus: an extinct genus of hominins that lived in South and East Africa from 4.2 to 2.0 million years ago.  ... more

Glacier: a large body of ice, like those in Antarctica.  ... more

Sagittal crest: a ridge of bone running along the middle of the top of the skull in some hominin species. This ridge of bone anchored the large chewing muscles of some Australopithecus and Paranthropus species. Sagittal crests are also found in other types of mammals, like spotted hyenas.  ... more

Tuber: a large, tough underground part of a plant, like a potato. ... more

As the seasons change, your food resources probably don’t. In many parts of the world, you can go to the grocery store and buy most of the same foods throughout the year. Whether you want strawberries in the heat of summer or the chill of winter, you can find them. 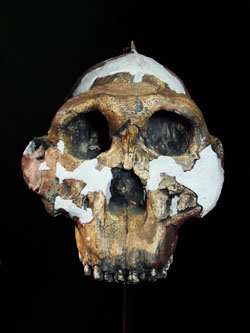 Now, imagine you didn’t have a grocery store to buy your food and that you didn't grow your own crops. You’d be living like early hominins did millions of years ago, and you’d have to spend all day long searching for food resources. If you were a member of Australopithecus, Lucy’s genus, you’d probably be eating a lot of fruit like chimpanzees do today. Later hominins, however, had to cope with major climate changes and a shift in the foods on the landscape. Fruit probably became rare as trees disappeared.

New kids on the block

Shortly after three million years ago, two new groups of hominins appear in the fossil record. One, Paranthropus, had large jaws and teeth and skulls with tall sagittal crests to anchor big chewing muscles. The other was our genus, Homo. Our earliest ancestors had smaller jaws and teeth and more lightly built skulls than Paranthropus.

The appearance of both Homo and Paranthropus in the fossil record, 2.8 to 2.7 million years ago, has been tied to major global cooling during that time. To the north of the globe, glaciers started forming and expanding 2.8 million years ago. The glaciers never reached Africa, but they did cause big changes to the climate—Africa became much more arid, or drier. Trees have a hard time growing in areas with low rainfall, so grasses spread during this time. 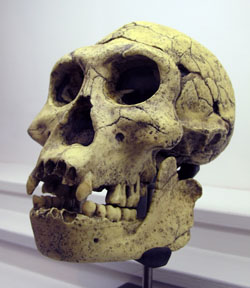 Some scientists think these two new groups of hominins appeared in response to the spread of arid conditions. This may have been because existing groups had to change their diets. Paranthropus adapted to these changes by eating common plants like tubers and grasses. Homo, on the other hand, started eating more meat. Homo possibly got its meat by stealing the scraps of lion and hyena kills. The differences in diets explain why the teeth and skulls of these hominins look so different. Plant matter is much tougher than meat, so Paranthropus needed bigger jaws and teeth than Homo to survive.