Bulb: in flint knapping, a small bump on the inside of a flake made by the force of hitting the flake off the core.

Core: in flint knapping, the center of the stone where flakes were taken off.

Flake: in flint knapping, a razor-sharp piece of stone hit off a core.

Flint knapping: the process of breaking flakes off of flint or stone to make stone tools. ... more

Hammerstone: in flint knapping, a rock used to strike a core and remove a flake.

Platform: in flint knapping, the part of a flake that is directly hit by a hammerstone.

When most people look at a rock all they see is…rock. But stone craftsmen have learned to see all the possible tools waiting to be broken out of rocks if they are hit just right. People in the past could also see the potential in stones and figured out ways to carefully shape rocks into nearly any type of tool imaginable.

Stone breaks in predictable ways. Stone craftsmen, called flintknappers, and archaeologists both use this fact to learn about the skills of ancient toolmakers. When a hard rock hits a softer rock with a very smooth but brittle structure in the right spot, a flake with very sharp edges will fall off. That sharp flake can be used for lots of things. But if you don’t hit it in the right spot, you’ll wear yourself out hitting rocks together without ever producing a flake. 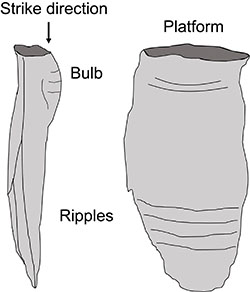 The oldest tools archaeologists have found are made out of stone. But how can we tell what is a tool and what is just a rock? Artifacts like arrowheads are easy to identify because there is nothing else in nature that looks like them. When archaeologists are looking for the earliest stone tools that are not as clearly shaped, then they can be more difficult to see.

Before we learn how archaeologists identify ancient tools, we need to define the words that describe how stone tools are made. In the previous example, the rock the flake came off of is called a “core,” because it is the center of where flakes come from. The rock you hit the core with is called a “hammerstone,” because it was used as a hammer. The part of the flake where the hammerstone hit when it was still attached to the core is called the “platform.” This whole process is called “knapping” or “flint-knapping.” That sounds like napping, but don’t fall asleep while you’re doing it!

A hammer hitting a core is similar to a stone dropping in still water. The stone hitting the water creates a splash and then makes small ripples. When a stone hits the core to make a flake, the energy first creates a large bulb on the flake and then creates ripples that remove the flake from the core. The bulb, platform, and ripples are features found on flakes. These features help archaeologists decide whether a flake is a tool or a broken rock.

Read more about Chipping Away