Association area: part of the cerebral cortex that connects sensory and motor information.

Brain: the organ that coordinates the senses, intellect, and the activity of your nervous system.

Cerebral cortex: the outer layer of the cerebrum, which makes up the majority of the brain.

Organ: a group of tissues that work together to serve a common function. ... more

Your eyes jump over the words on the page, and you quickly understand the message. How can you read a sentence, use a computer, or remember how to get home? You do these things with your brain—the large organ that sits inside your head. The brain coordinates all of your senses, makes you move, and lets you store memories. 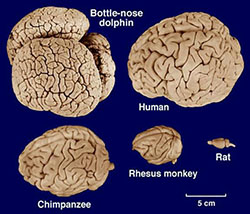 The brain is also able to do much more. It is the command center for your body. It gives you your personality and your ability to speak, reason, and dream. Oddly enough, you are only able to think about the fact that you have a brain because you have a brain.

The human brain weighs about three pounds and has a volume of about 1,300 cubic centimeters, about the size of ten tennis balls. Humans have some of the largest brains compared to other animals. This is especially true if you consider the size of the brain relative to the size of the body. In humans, the brain makes up about two percent of our body mass.

Let’s consider how that number compares with other mammals. At 400 cubic centimeters, which is about the size of three tennis balls, the brain of chimpanzees—our closest living relatives— is only 0.8 percent of their body mass. An elephant’s brain, although measuring a whopping 7,200 cubic centimeters, is only 0.1 percent of its mass. Now you can begin to see that human brain size is actually quite impressive. 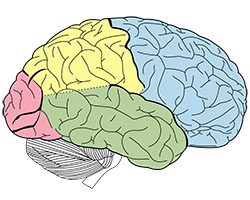 The association areas of the cerebral cortex are especially large in humans. These areas bring together information from different parts of the brain. They are important in functions like planning. Have you ever seen a rat make a plan or read a book? Rats cannot do these activities because the cerebral cortex of a rat is very small and simple. Rat brains do not have the complex folds that are found in human brains.

Why did humans evolve such large brains?

Imagine having a large pinball machine that you had to feed with coins everyday. If you never got to play pinball then you would probably get rid of it. If, on the other hand, feeding the machine with all those coins made the games extra fun, then you would want to hang on to it even though it costs a lot of money. We can think about brain size in the same way. 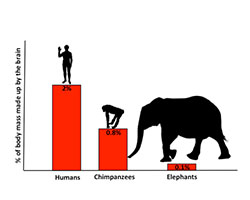 Brains require a lot of energy to grow and maintain. This makes them an expensive organ. There had to be an advantage to having a large brain in order for brain size to increase during human evolution. Think about what benefits may be related to having a large brain. For humans, a larger brain means greater intelligence. Our intelligence allows us to process and store information. It also allowed language to evolve.

Humans depend on language, social learning, and culture. Imagine living in a society without language or strong social bonds. Sounds pretty lonely. Language made it easier and quicker to learn and to communicate with one another. It also made social bonds between family members and friends stronger. Having a larger brain may have let our ancestors develop a complex culture.

Read more about Brains over Brawn 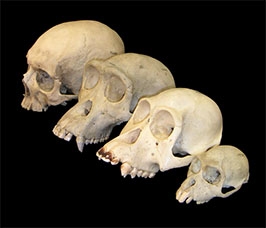 Scientists can learn a lot about brain size by studying skulls.

Learn more about brain function on Ask A Biologist's story A Nervous Journey.