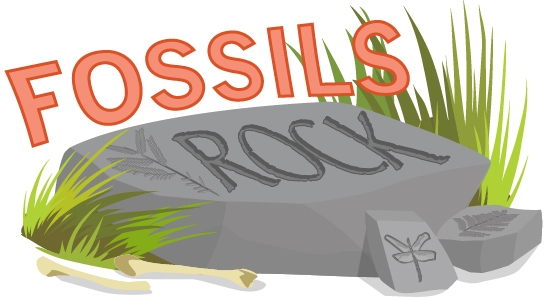 Biome: a formation of plants and animals that have common characteristics due to similar climates and can be found over a range of continents.

Ecosystem: a community of living organisms and non-living things such as the interactions and relationships between animals, plants, the landscape, the sun, rain and air.

Fossil record: the collection of fossils, which are the remains or traces of a living organism that have been preserved in the geological record.

Sedimentary rock: a type of rock that is composed of fragments of rock and mineral grains of various size (clay-boulder). Some sediments are made by precipitation of minerals like salt, or from marine skeletal fragments.

Geology and the fossil record

On a hot day in eastern Africa, a group of scientists is hard at work. The sun beats down and there is no shade but for a rare acacia tree. Many anthropologists and paleontologists crawl slowly along a hill looking closely at the ground. They are searching for early human (hominin) fossils. Hominin fossils are the key to our (Homo sapiens') history. Digging up the hillside and hiking over the nearby hills are geologists studying the area’s geologic history. Knowing the environments animals lived in millions of years ago helps scientists know how the animals evolved. In fact, fossils document the evolution of animals and their environments as far back as 600 million years ago. This huge collection of fossils is known as the fossil record. 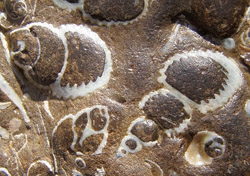 Fossils leave clues to the past. They are remains or traces of organisms that have been preserved in the rocks. Fossils are typically found in sedimentary rock, a type of rock that was deposited by wind or water. You can find sediments at the bottom of lakes, rivers, and oceans. They cover hills, make up sand dunes and beaches, and fill in valleys. By being buried in sediments, bones are protected from things like animals stepping on them, or even rain and wind slowly breaking them down into pieces. In this way they are preserved to become fossils.

At a fossil site known as “AL-333” located in Hadar, Ethiopia, a group of at least 17 hominins were found on a hillside. Because these fossils include adults and children, they have been called the “First Family”. The fossils came from within silty-sand below a thick sandstone layer. The sandstone (sand cemented into rock) tells us there was a river nearby because you need flowing water to move and deposit the sand grains. The sediment the fossils were found in tells us that maybe the river flooded and the fossils spilled out of the river and were buried quickly. Also, the bones did not show any weathering marks from sitting on the surface for a long time. If they had not been deposited and buried like they were, these bones may have never become fossils.

The fossil record is not only about bones. Geology is the study of the Earth: Rocks, sediments, and the processes that shape mountains, create oceans, and move lands. From this field of study we can improve what we know about a fossil site or group of fossils. The sediments associated with the fossils can help date them, tell us what kind of environment the organisms lived in, where and how they died, how fast they were buried, and how long they were exposed to the elements. 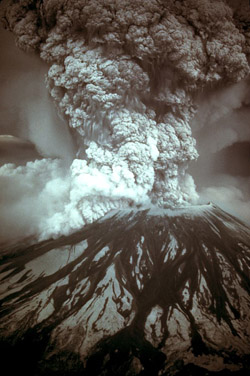 When a volcano erupts it creates a huge ash cloud that can be carried around the world by wind. And as we all know, what comes up must come down. All the ash, crystals and other material broken up by the eruption falls back down to the Earth’s surface, covering everything with a grey powder.

This volcanic deposit is called tephra. One way geology is used in the fossil record is to date fossils through tephra. Looking at the amount of two isotopes and comparing them against each other, geologists can date sediments. Geologists use this method on crystals that are found in tephra. These crystals give us an age that we use to date the tephra and the eruption that it came from. This age is then used to tell us how old fossils are that are related to that tephra.

Most animals need to live in certain habitats because of the kinds of food, shelter, and climate that habitat provides. A hippopotamus needs slow-moving rivers or lakes. A cheetah needs open grassland to run and catch prey. Fossils can give important information about the animal they came from that had once roamed through certain habitats. Information from fossils may include how the animal walked, its size, what type of food it ate (meat eater, plant eater or both), or what kind of ecosystem it lived in. 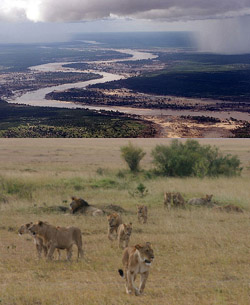 However, there is some information that paleontologists cannot get from studying fossils, but can get from geology. The kind of sediments (clay, silt, sand, or gravel) and their grain size can tell you how fast and rough the current that moved and deposited the fossils had been. Clays and silts are very fine grained. These types of sediments only need very slow and calm waters to get deposited, such as in a lake. Sands are larger than silts and clays, but to us are very small grains. Because of their size, sands need stronger flowing waters or winds to move them. Gravels, because they are much larger and heavier, need even stronger water currents to move. This kind of information can help scientists know how far bones had been moved, how the animal could have died, and whether they might be able to find more of the fossil(s) from that animal. 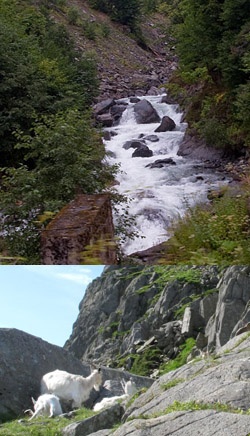 The geology can also tell us what the environment was like when the bones were deposited. This is called the depositional environment, and relates to the type of sediment that surrounded the bone. A beach or river (a type of environment) is related to the deposit of sands (a type of sediment). A lake is related to the deposit of clays. In many habitats, like forests or deserts, we can find the same depositional environments. For example, we can find rivers in forests, grasslands, and even some deserts. Both fossil and geology data help fill in pieces of the puzzle to what the past was like.

A complete picture of fossils and their ecosystem can be brought back to life once again. But it takes the effort of scientists who study sediments, humans and human ancestors, and fossils of other animals. 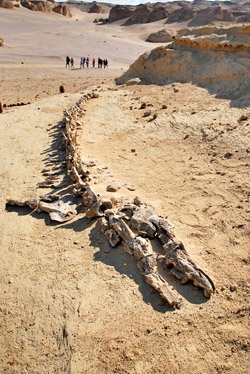 Imagine a beached whale lying on the sand. Eventually its bones are all that remains. Then sand begins to bury the bones. Over thousands to millions of years the bones will become fossils and the surrounding sand becomes sandstone.