Feldspar: a mineral that crystalizes (forms) from magma. This mineral can be used to date rocks because it contains the radioisotope Potassium-40.

Magnetic North Pole: the point where the Earth’s magnetic field points vertically downwards; right now this is located near the North Pole.

Paleomagnetism: the study of the Earth’s magnetic field recorded by magnetic minerals in rocks.  ... more

Radioisotope: an isotope that has an unstable nucleus because of its neutron number and decays at a known rate to a more stable form. For example Carbon -14 has 6 protons and 8 neutrons. This makes it unstable and every 5730 years half of those Carbon-14 isotopes have decayed (changed) to Nitrogen-14, a more stable isotope.

Radiometric dating: a technique that measures the age of material such as rock or carbon, using known rates of decay and the observed amount of radioactive isotopes in the material. ... more

Dating fossils: Not including a dinner and movie.

With a fieldpack on my back and a rock hammer in hand, I race toward a foot-thick ledge sticking out of a hillside. “Please let it be a tephra!” I hoped. If it’s tephra, we can date the fossils nearby. Tephra is a volcanic deposit consisting of fragmented material that was projected into the air by a volcanic eruption and fell to the ground. Tephra consist of volcanic glass and crystals. Some of these crystals are feldspars, which contain the radioisotope potassium. Over time, potassium turns into argon. The ratio of potassium to argon isotopes in each feldspar crystal can give us an age to assign to nearby fossils. This form of dating is called radiometric dating and is one of several ways geologists date rocks and sediments. 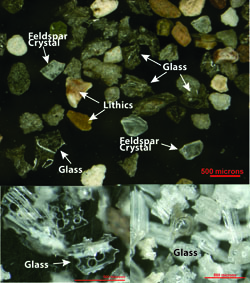 The volcanic glass in tephra is also important. When a volcano erupts the magma cools and hardens so fast it creates glass. The force of the eruption causes the glass to break into tiny glass shards, called ash. These tiny glass pieces are unique to each eruption. Geologists can use the tiny glass shards to match tephra from different locations by looking at the amount of various elements in the glass.

Magnetic materials in rocks record the direction of Earth’s Magnetic North at the time the rocks were buried. Geologists look at the direction the magnetic minerals in rocks are pointing to know the age of those rocks. 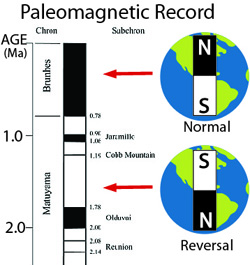 Think of the magnetic field as a giant magnet in the Earth. When rocks are hot and soft, the minerals that make up the rock can move around and align to the Earth's Magnetic North location at that point in time. When the rock cools and hardens, the magnetic minerals get frozen aligned in that direction.

Today’s Magnetic North is around the North Pole, so if you think about it in terms of a clock, the minerals in a rock that had hardened today would point at the 12. Magnetic North hasn’t always been in the north. In fact there are several periods of time in the Earth’s history that it was flipped; Magnetic North was located at the South Pole!