Ancestor: an organism from which others have evolved. In humans, a relative from whom one is descended, who lived at least several generations ago.

Naturalist: an expert in or student of natural history or life sciences.

In 1859, Charles Darwin published a book called On the Origin of Species that completely changed our understanding of how biodiversity arises. 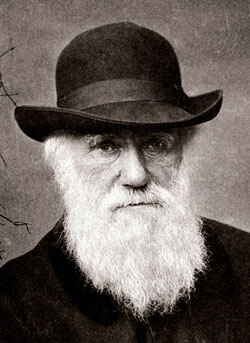 Charles Darwin was born on February 12, 1809, in Shrewsbury, England, into a family of thinkers. Darwin’s grandfather, Erasmus Darwin, had been a naturalist. He published a two-volume book called Zoonomia. In Zoonomia, Erasmus suggested that all life on Earth could have come from a single source. He also said that animals could change because “the strongest and most active animals” would have the most offspring, which would shift the traits of their species over time. Though Erasmus died before Charles was born, Charles Darwin would follow in his grandfather’s footsteps. Erasmus’s ideas influenced his grandson’s own thinking about the natural world.

Darwin’s voyage on HMS Beagle was a huge turning point for him.  During his time on a five-year trip around the world (1831–1836), Darwin, employed as the ship’s naturalist, made copious notes about the animals and plants he encountered. He collected specimens to send back to England. While in the Galápagos Islands, he noticed that on each island, tortoises had slightly different shell shapes and finches had different beak and body sizes. By the time he returned to England, Darwin’s head was full of new ideas. Less than a year after arriving home, Darwin drew this famous sketch in one of his notebooks.  A more formal version of this evolutionary tree appears in On the Origin of Species and is used to illustrate the key ideas of Darwin’s theory of “descent with modification.” 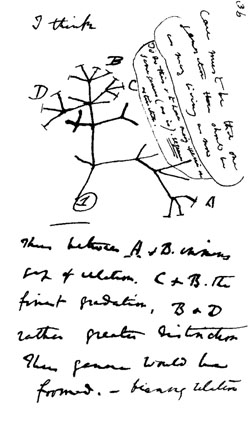 One of the most revolutionary things Darwin said was that species are not static, but change over time. Although he was not the first to make this claim, before Darwin, most people believed that species were exactly as they had been created. Darwin described the mechanism by which species change, which he called “natural selection.” Natural selection occurs when some individuals in a population are more likely to survive and breed in their habitat because of some trait that gives them an advantage over other individuals. The individuals that possess this trait will have more offspring, which are also likely to have this trait, and eventually, the trait will spread in the population.

Darwin’s ideas described what has become known as the “theory of evolution.” The full name of Darwin’s famous book is On the Origin of Species by Means of Natural Selection. Surprisingly, the word evolution only appears in his book once! But when people think of Darwin now, they think of evolution. Donald Johanson said, “Charles Darwin formulated one of the most extraordinary ideas of the Western mind, the idea of evolution by means of natural selection.”

Read more about On the Origin of Species

Alexandra Norwood. (2017, Jan 17). On the Origin of Species. Retrieved January 28, 2023, from https://askananthropologist.asu.edu/stories/origin-species