Biological anthropology: the branch of anthropology that studies the biological origins and traits of humans, our ancestors, and other primates. ... more

Canine tooth: sharp teeth that are very large in carnivores like cats and dogs. ... more

Descent: the origin or background of a person or species.

Evolution: the process by which different kinds of living organisms are thought to have developed and diversified from earlier forms during the history of the earth.

Anthropology is deeply connected to Darwin’s theories about human evolution. In On the Origins of Species, Darwin avoided discussing one critical topic, the implications of his theory for the evolutionary history of our own species. He touched on it briefly at the very end of his book, writing “Light will be thrown on the origin of man and his history.” Twelve years later, in 1871, he published The Descent of Man, which applied his evolutionary theory to human origins.

In The Descent of Man, Darwin argued that the evolution of bipedality (walking on two legs) freed the hands from use in locomotion. This important event resulted in a cause and effect scheme for the evolution of key human traits, such as small canine teeth, large brains, and tool manufacture.

At the time of The Descent of Man’s publication, the human fossil record was scant, consisting only of a few Neandertal fossils in Europe. Darwin came up with his origins scenario to account for the differences he and others observed between living apes and humans. He had no fossil record to look to and no way of knowing the evolutionary sequence of these human traits. A test of his evolutionary scenario for human origins would come much later, as new fossils were discovered in Africa and elsewhere. Based on the fossils we have now, we can deduce that reduced canine-teeth appeared at around the same time as bipedal locomotion (learn more about canines here: https://askananthropologist.asu.edu/stories/chomp-past). Brain size, on the other hand, increased to modern-human size much later (read more about when brain size increased here: https://askananthropologist.asu.edu/stories/when-did-our-brains-get-big). Although new discoveries have pushed the manufacture of stone tools back to the time of Lucy, it seems that the first bipeds evolved much earlier than stone-tool manufacture (learn more about stone tools here: https://askananthropologist.asu.edu/stories/chipping-away-tools-stone-age).

Although some of Darwin’s ideas about the evolution of human traits may not be supported by current evidence from the fossil record, his fundamental arguments remain valid. Darwin thought that humans and apes shared a common ancestor in the geological past. He predicted, correctly, that because African great apes are most similar to humans, our ancestors evolved first in Africa. We now know that not only did our earliest ancestors evolve in Africa, but so did our own species, Homo sapiens. This was established by genetic studies long after Darwin’s death (learn more: https://askananthropologist.asu.edu/history-written-your-genome). and is confirmed by recent fossil and archaeological discoveries.

Read more about On the Origin of Species 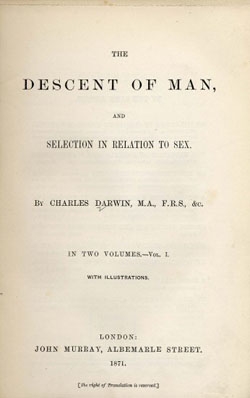 This book was first published in 1871 and reprinted many times after. Image in public domain.