Bachelor: a lone male that does not have a mate.

Diurnal: an animal that is mostly active during the day.

Primatology: the branch of biological anthropology that studies the behavior and biology of living primates. ... more

Troop: a primate group. Most primates live in troops. Really big troops (like hundreds of mandrills) are sometimes called hordes.

It's another typical day. You wake up in the morning. Your family is getting ready to leave the house. You're looking forward to spending the day learning and playing with friends.

You climb out of your sleeping tree. Mom starts to pick at your hair. You grab a handful of leaves and start chewing on breakfast...

Not all primates live in trees. Humans don't, but we still share many things in common with apes and monkeys. As primates, we’re good at climbing, and we have big brains. What about how we behave? Do we act like monkeys and apes too? There is a special branch of science dedicated to these questions.

Primatologists are people who study nonhuman primates to learn more about them and about us. If you ask a primatologist, he or she will tell you that humans behave a lot like other primates. Other primates don’t live in houses or ride in buses and cars to get to school. But they do spend time with their families, learn from each other, and even play. 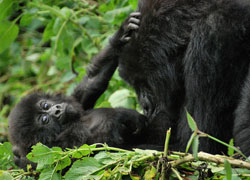 You finish your breakfast and it’s time to get moving. You need to go find water and forage for tasty plants to eat. Your family and friends gather in a big group. Together, everyone heads out across the landscape.

Primates that live in groups are called “social primates.” Not all primate groups are the same. Some are big, and some are small. Not all monkeys and apes are social either. Some are solitary (they live alone) or live in pairs.

Tamarins have some of the smallest primate groups, with only five-monkey family troops. Adult children live with their parents and help care for younger brothers and sisters. Eventually, though, the older children will head out to form their own families. 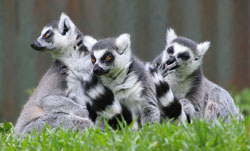 On the other end, hordes of mandrills sometimes have hundreds of males and females in their groups. In these groups, unrelated individuals will help contribute to group defense. They will team up to fight other mandrills that want to take over their territory. Males will also fight predators that are threatening females and infants. With so many primates, there can be a lot of competition for food and mates. In large groups, primates fight to get access to the best food and mates.

Other social primates live in groups made up of one male and many females. This lone male is usually the only individual that mates with the females. Other males who don’t have female groups will form roaming bachelor groups. Sometimes a bachelor male will fight to take over leadership of a group of females and have his turn in charge for a while.

Finally, chimpanzees have a unique social organization. Within a group of chimps, individuals will break up and join different parties from day to day. Unlike other primate troops that remain the same, chimpanzee parties are always changing

Primate groupies: Why live together?

When it gets hot, your group stops to rest. Mom goes to take a nap. Your older sisters are playing with each other's hair. You decide to go explore. 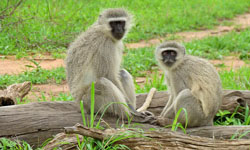 Suddenly you hear a loud shout. It's a leopard alert. You run back to the group. Everyone hides in the trees. You get lucky. This time, the leopard decides to go hunt something else.

Most diurnal primates enjoy living in groups. Group-living primates can join together to defend their territory or protect against predators. Primates that spend time with their group are also usually healthier and happier.

Vervet monkeys live in eastern and southern Africa. They spend time both in trees and on the ground. Predators can attack them from the trees, the ground, or the air. Vervets use different alarm calls to warn other group members of these dangers. For example, an eagle alarm call will send monkeys hiding under nearby bushes. A leopard alarm call will send them up into the trees. A snake alarm will make them stand up and watch the ground carefully. 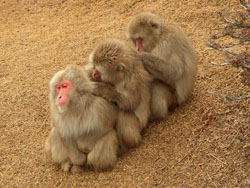 Social primates benefit from being around each other, too. Many kinds of primates groom each other. This is like combing your friend's hair. During grooming, one primate will comb through another’s fur. They pick out ticks and other insects and make sure they are clean. These bugs often make a tasty snack for the primate groomer. Grooming also helps reduce stress for both primates. Have you ever felt better after petting a cat or a dog? That’s how primates feel after they groom each other.

What can we learn from social primates?

Primatologists spend a lot of time with primates. Some go to Africa to watch what the primates that live there do. They take notes about where primates go and who they spend time with. These include solitary and pair-living primates that don't live in big groups.

Other primatologists study captive zoo animals. They set up games to see how apes and monkeys learn to solve problems. Young primates are especially good at learning new things.

Sadly, humans are one of the biggest threats to the survival of other primates. We need to work hard to save our closest living relatives. Otherwise, we could lose them forever.