Monogamous: the relationship of animals that live in mating pairs of one male and one female.

Nocturnal: animals that are mostly active at night.

Solitary: to be or live alone.

What about nonsocial primates? 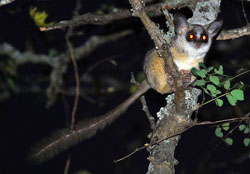 Living in a big primate group can be a lot like a school cafeteria. Everybody talks really loudly, and you can’t always find a space to sit.

Being too loud can attract the wrong kind of attention. If you're shouting in the cafeteria, a teacher might come tell you to be quieter. For a primate it’s worse than that – being too loud will attract predators. A leopard doesn’t tell them to make less noise. Instead, it will try to eat primates that don’t notice it sneaking up.

Space also becomes an issue in big groups. If too many people are sitting at your table, you might have to split up. If too many primates are foraging in the same tree, they have to split up too. The primates that leave need to go find a new tree. These primates become more vulnerable to predators away from the group. When they do find a new tree, the fruit or leaves may not be as ripe. 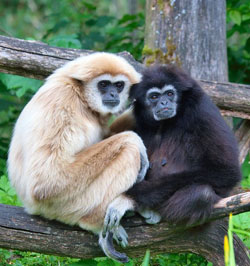 Many small, nocturnal primates eat insects instead of fruit or leaves. Individuals live alone and control their own territory. They don’t fight over the same insects or scare them away by being loud. Males and females only meet each other at certain times of year to mate.

A pair of primates

Other primates live in pairs of two. This monogamous pair consists of a male and female that live together. They both defend their territory from other males and females. Males living in primate pairs are often good fathers. They spend time caring for their kids instead of fighting with other males in a group.