Great ape: a large ape that is set apart from monkeys by a larger body and brain, longer life span, and higher intelligence. Great apes are also bigger than the other "lesser apes." Great apes include gorillas, bonobos, orangutans, and chimpanzees.  ... more

Inorganic: doesn't include any living matter.

Sexual dimorphism:  a difference, such as size or coat color, between males and females within the same species.    ... more

You are sitting in a dark movie theater. You are trying to enjoy the movie, but you keep thinking about a pesky piece of popcorn stuck between your molars, the back teeth. After fumbling for a toothpick in your pocket, you dislodge the popcorn. You glance down at the toothpick and see a bit of blood from your gums. Although the popcorn is gone, your tooth still throbs with pain. 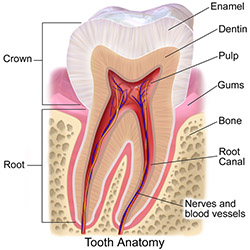 Usually we only see the enamel, but most of a tooth is actually made of dentin. Dentin is slightly harder than bone, but it is softer than enamel. Dentin is a sensitive tissue and renews throughout life. If your teeth feel sensitive or you suspect a cavity, it is your dentin letting you know. Dentin is directly under the hard enamel, but it also makes up the roots. In the same way that tree roots anchor a tree to the ground, tooth roots anchor the teeth to the jawbones.

Another layer, cementum, covers the roots and helps glue, or cement, the roots to the jawbones. This provides additional support for the tooth. Under the dentine is pulp.  Pulp nourishes and maintains the dentin. Every single tooth in your mouth has many different tissues. These tissues work together to help keep your teeth strong and healthy. 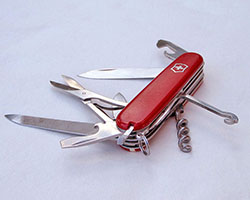 When we think of using our teeth we probably just think of eating, but teeth do much more. We also use our teeth to help us talk. Some animals, like beavers, use their teeth to build lodges. Teeth are like a Swiss Army knife. A Swiss Army knife can have lots of tools, like a blade, scissors, and screwdriver. The same thing is true about our teeth. Our teeth are like portable tool kits that come in several shapes and sizes.

You have an upper and lower set of teeth. Adult humans usually have a total of 32 teeth. We have four tooth types that help perform specific tasks: Incisors, canines, premolars, and molars. We have eight incisors, four canines, eight premolars, and twelve molars. There is a special word for teeth that come in different sizes and shapes. That word is heterodont. Heterodont means "differently shaped teeth." Most mammals, like humans, have heterodont teeth. 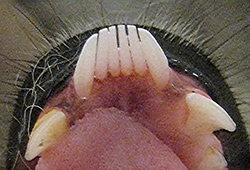 The incisors look like small, flat blades, or chisels. The function of the incisors is to incise, or cut, into foods that are too large to fit into our mouths. For example, when you eat an apple, you use your incisors to make that first bite. Other primates, like some lemurs, have lower incisors shaped like hair combs. These teeth are called toothcombs and lemurs use them to keep their coats groomed. 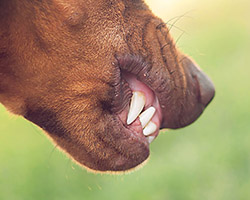 Next to the incisors are the canines. Canines are sharp and pointy. Some animals use their canines to process foods. However, the canines are also used to communicate. One way to remember this is to think about how dogs are also called canines. Angry dogs often flash their canine teeth. This is a dog’s way of communicating. The dog is basically saying, “Leave me alone.”

Male gorillas and chimpanzees also flash their canines. They do this to ward off potential mating rivals. Because male apes use their canines to communicate, male great apes have larger canines than females. The size difference between males and females has a special word. The word is sexual dimorphism. In comparison, humans have small canines. Our small canine tooth is due to our evolutionary history.

Right behind the canines are two premolars. They are in front of the molars, so they are called premolars. In humans these teeth have two noticeably sharp bumps. In great apes, the lower premolar closest to the front of the mouth is very different from ours. It is triangular and slides against the upper canine when great apes open or close their mouths. Sliding those two teeth together sharpens the canine. This is similar to a knife sliding against a sharpening stone. 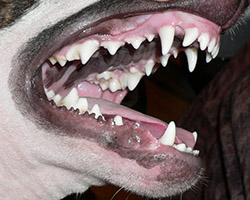 The teeth farthest back in your mouth are the molars. You can have up to three molars on each side of each jaw (12 total). Many people only have eight molars because they need to have their third molars, the wisdom teeth, pulled. The word molar comes from the classical Latin word molāris, which translates as “to belong to a mill.” Molars have a boxy, rectangular shape and are filled with bumps and ridges. We use our premolars and molars like mills to crush, grind, and chew most of the food we eat.

When an organism dies, it might become a fossil. A fossil is the preserved remains of an organism, like an animal or plant. Teeth are preserved very easily. This is because during life, teeth are made up of a large proportion of inorganic matter. Hence, a tooth’s shape and size is preserved for millions and millions of years. When we look at fossilized teeth, we can often figure out what it was used for just by looking at its shape and size. Teeth are some of the most important fossils to study. Paleoanthropologists rely on teeth to learn about how humans and other animals lived in the past.

Read more about The Tales of Teeth 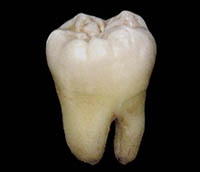 Our molar teeth are used to crush, grind, and chew our food.

The Tales of Teeth