Diet: the amount and type of food and drink that an animal eats.

If you look at the sole of your shoes and see how they wear, you can tell how you walk. Our teeth are the same way. Depending on how and what we eat, our teeth produce a specific wear pattern. Scientists read the wear patterns by studying how the chewing surfaces change over time. They also compare the wear with known information about diet. But how do scientists do this?

There are two types of tooth wear scientists study on teeth—macrowear and microwear. Macrowear are features visible with the naked eye. Microwear can only be seen at high resolutions, such as under a microscope. 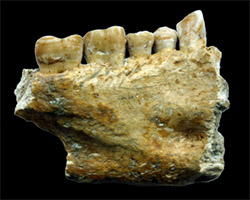 To study macrowear, scientists measure how the whole tooth surface changes over time. Teeth that wear faster have a higher rate of wear. Sometimes higher rates of wear are due to specific diets that have a lot of sand and grit. If there are signs of a lot of sand and grit, it can inform scientists about how individuals collect and process foods. For example, some people from the past used grinding stones, called metates, to process corn. These people's teeth often wore down very fast due to the tiny bits of stone that made its way into the food.

Smaller changes can be harder to see. To study microwear, scientists rely on only a small portion of the chewing surface. They look at that specific portion at very high resolutions. Scientists look for features like pits and scratch lines, which are caused by certain types of foods. For example, pits appear on a tooth’s surface when an animal cracks open nuts with its teeth. Long scratch marks result from eating grasses or leaves. Using these “food-prints," scientists can figure out what our ancestors ate.

Read more about The Tales of Teeth 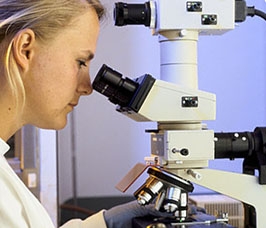 Some anthropologists use microscopes to see small signs of tooth wear, called microwear.

The Tales of Teeth