The animal moved quietly through the tree, from branch to branch. Slowly, it started to climb down and soon it landed on the ground. There, it stood up on two feet and walked away. Living a life in the trees doesn't mean you can't walk on two feet. 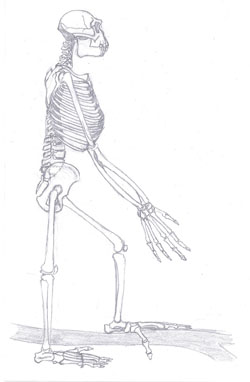 The brain size of this species was small, measuring around 350 cubic centimeters, which is about the size of two and a half tennis balls. It was small even compared to the chimpanzee, which has a brain size of about 400 cubic centimeters. For comparison, human brains are nearly three times this size. Ardipithecus ate mostly fruit and did not include much meat in its diet. Could this be part of the reason their brains were so small?