Cranial cavity: the space where the brain sits; it is enclosed by bones of the skull.

Endocast: a cast of the internal part of the skull where the brain sits.

South Africa: a country that is located in the southern part of Africa.  ... more

Underground storage organ: a part of a plant that grows underground and can be eaten.

The female Australopithecus jumps into a new tree, and the smell becomes stronger. There, on the ground, is a freshly killed, hoofed animal. She moves closer and checks around for the predator that made the kill. There is no predator in sight, so she slowly moves in and starts eating. With lots of calories packed into each bite, she can't pass up this important scavenged meal.

A scene like this probably took place for a member of the genus Australopithecus, a group of hominins that lived in South and East Africa from 4.2 to 2.0 million years ago. These hominins were bipedal and had large jaws and teeth, which they used to eat a variety of foods, including fruit, seeds, leaves, and underground storage organs (e.g., tubers). Their diets probably included some meat, although the meat was likely scavenged and not hunted. Because the development of larger brains is thought to be linked to eating meat, we can expect that these hominins had larger brains than Ardipithecus, but smaller brains than humans. This is indeed what we find. 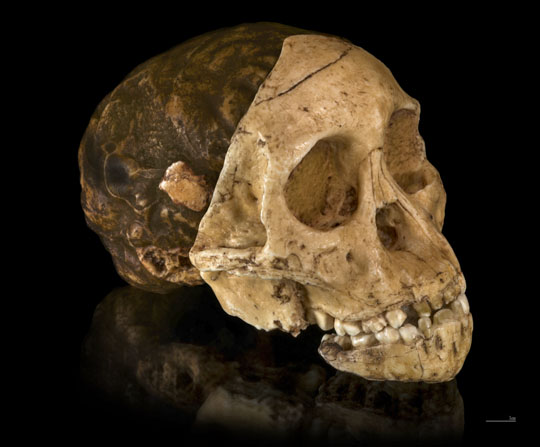 The first Australopithecus fossil was discovered in 1924 in South Africa and is known as the Taung child. Most of the individual’s skull was preserved. Surprisingly, the fossil also includes a cast of the internal structure of the braincase, known as an endocast. Endocasts are rare in the fossil record, but they can tell us a lot about brain structure. The cast showed us that their brains shared some similarities in organization with our brains.

Australopithecus had slightly larger brains than chimpanzees with a more modern brain shape. We also have fossil evidence that this early human ancestor used simple stone tools. These stone tools were likely used to remove meat and bone marrow from scavenged animals.