Atlatl: a handheld lever used to hurl spears faster and farther than when they are thrown normally. ... more

Microlith: a small stone tool mounted onto a piece of wood or bone to make an arrow or similar tool. ... more

Projectile technology: a tool or weapon that can be shot at a target from a distance.

Slowly stalking her prey, a young hunter pulls an arrow out of her quiver and takes aim. A short distance away, guinea fowl have gathered to rest, unaware of the danger. After the arrow is released, the flurry of feathers and squawking means it was a good shot. The hunter and her family will have meat tonight. Humans may not be as quick or strong as some other carnivores, but we are still able to be the top predators in many areas thanks to projectile technology. It’s difficult to say when slings that propel stones were first made or for how long humans have been throwing sticks and stones. But small stone tools from South Africa may hold clues to our creative, and possibly violent, past.

Small stone flakes are called microliths, and they are useful for many things. They are also efficient to make, as one medium stone can make many microliths. These sharp stone flakes can turn dull from use, but microliths are actually used as inserts in spears and other tools. Hunters would just replace the flake on a spear if it got dull. This is like replacing the blade in a shaving razor used today. 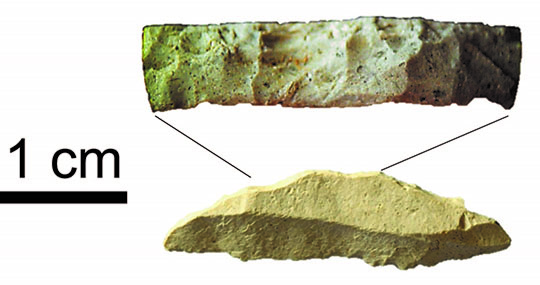 Some of the earliest microliths are from the Middle Stone Age site of Pinnacle Point Cave in South Africa and are 70,000 years old. Based on how these tools were broken, archaeologists think they were used for hunting. The microblades would have been used as part of projectile technology. They could have been used to tip arrows that were shot with a bow or to tip darts that were thrown with a spear-thrower called an atlatl. Using these tools, hunters could kill more animals without putting themselves in harm's way. Modern humans used these tools to be very successful. Because of this great benefit, the use of projectile technology spread all over the world.

Read more about A Brief History of History

A Brief History of History