Ancestry: a person’s origin or background; family or ethnic descent.

Neanderthal: An extinct hominin species that was closely related to humans; Neanderthals occupied regions of Europe and the Middle East and went extinct about 35,000 years ago.

Neanderthals and their DNA

"What a Neanderthal!" You may have heard something similar before. People like to think of Neanderthals as dumb cavemen that carried clubs. But Neanderthals looked a lot like modern humans and were relatively smart.

Neanderthals lived in Europe at the same time as modern humans and are members of our genus, Homo. Because they lived in similar places, scientists wondered whether these two groups made contact with one another. Were there fights between the groups? Did modern humans and Neanderthals mix their families together? Were they having children together? To look at these questions, scientists turned to Neanderthal DNA.

Paleoanthropologists thought Neanderthals were close members of our family because their anatomy was very similar to ours. Now, because technology is much better, we can collect DNA straight from Neanderthal bones. We can then use this DNA to find out exactly how closely related Neanderthals and humans are to each other. 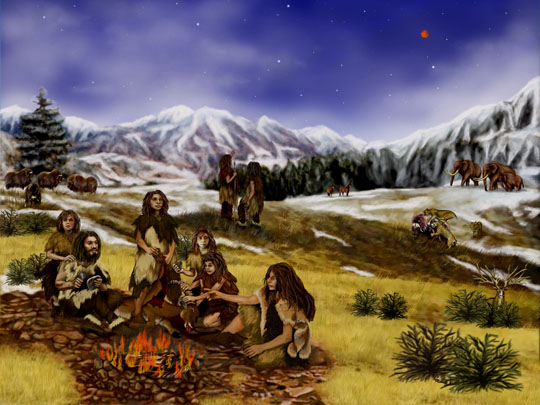 It is thought this similarity is because those parts of the genome came from Neanderthals. Now, not all humans have this Neanderthal DNA. The individuals that do have Neanderthal DNA have their roots in Europe where Neanderthals were known to live, and in Asia.

How can I find out about my DNA?

Some lab companies can do a DNA test for you so you can learn about your ancestry. DNA tests are done on a sample that you provide them, usually some of your spit. They will be able to send your results to you in the mail, and you’ll know all about where you and your family came from. Who knows, maybe you have a little Neanderthal in you too!

The National Geographic Genographic Project has collected DNA information from many people around the world to answer questions about human evolution.

Read more about To the Laboratory!