Egalitarian: a society that does not recognize differences in economic or social power between individuals. Instead, the whole community helps make decisions, and resources are shared among individuals.

Free-rider: someone who benefits from group cooperation, but who doesn’t contribute anything.

Pastoralist: a person who makes a living by raising domestic animals (livestock, like cattle, goats, or sheep). ... more

Crime and punishment—tales from the Turkana 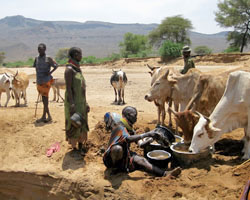 The sun is just rising over the African savanna. You and your buddies are going on a raid. Your neighbors have the best cows, and you want to steal them. If you succeed, each of you will get two new cows. That’s a lot of milk and meat to feed your friends and family.

But raids can be dangerous. People can get injured or even killed. Why not run away and hide in the smoke and confusion? You can wait for the fighting to end and then claim your cows. Nobody will notice you’re being a free-rider.

Suddenly, you find yourself all alone in the middle of a field. Your friends have all run away. You can’t steal those cows all by yourself, so you back away. Instead of taking home two cows, everybody goes home hungry. 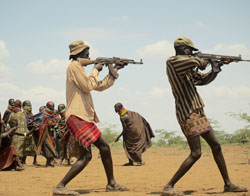 The Turkana people are egalitarian pastoralists living in East Africa. They raise goats, camels, and cows for food. The Turkana will sometimes raid neighboring groups to steal livestock. These large raiding parties are made up of hundreds of men from different Turkana villages.

The Turkana don’t have police to catch criminals. Instead, they rely on each other to cooperate. Free-riders hurt the whole community. To discourage this, the Turkana will fine a free-rider or punish him with a beating. Fear of punishment is what encourages men to join in risky raids. And fear of free-riders encourages the community to punish people who run away from a raid.

The Turkana have strict rules about good and bad behavior. These rules encourage people to work together to help the whole community. The more people cooperate, the stronger the community becomes.

Read more about There's No I in Human

There's No I in Human