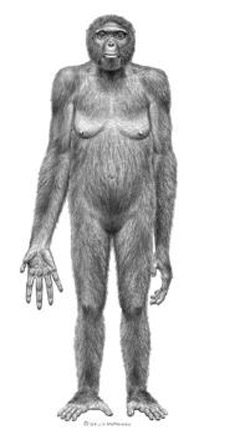 Have you ever heard the expression it “runs in the family?” Maybe someone has told you that you have your parent’s eyes or grandparent’s artistic talents. But how far back do you think this saying can still apply?

Imagine traveling back 5.8 million years. What did our early hominin ancestors look and act like? Paleoanthropologists have found several fossils that belong to the genus Ardipithecus. We have fossils of Ardipithecus that date to between 5.8 to 4.4 million years ago. A nearly complete female skeleton, nicknamed Ardi, shows us that Ardipithecus shared some features with humans and others with the great apes. One trait of Ardipithecus that looks more human-like is its teeth.

Many male great apes have upper canines that are big and pointy like a dagger. Many female great apes also have dagger-like canines, but theirs are not as big as the male canines. The reason male canines are larger than female canines is because males show off or use these teeth to compete with other male suitors. 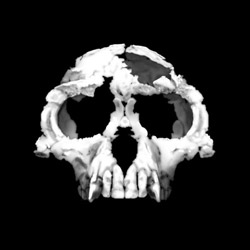 What about Ardi? She and male members of her species also had smaller, diamond-shaped canines. The size and shape of the canine suggest to scientists that Ardipithecus ramidus was a hominin. Since we know when Ardipithecus lived, we know that 5.8 to 4.4 million years ago something caused the canines to change shape and become much smaller.

Paleoanthropologists think that the smaller canines mean that Ardipithecus males competed for females differently than most of the living great apes, like chimpanzees or gorillas. For example, Ardipithecus males probably did not use their canines in male-to-male combat. Therefore, big canines were not needed to attract females. Over time, smaller canines were selected over big canines.

Ardipithecus teaches us that we inherited our small canines very early in hominin evolution. So the next time someone comments on your lovely canines, you can tell them that they have been in the family for at least 4.4 million years.