If you were standing in a crowd 2.8 million years ago, could you have picked out a fellow member of Homo? Probably not, unless you asked to look at his or her teeth. 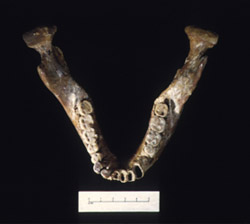 Since around 2.8 million years ago until now, the Homo group has emerged and evolved. Throughout this time, brains have become bigger but the jaws and teeth have become smaller. The dramatic decrease in the size of the whole dentition, especially the back teeth, occurred in Homo erectus, a species that lived from 1.89 million years ago to as recently as 143,000 years ago.

Homo erectus and later members of the genus Homo appeared to have learned how to control fire and cook food. The ability to cook food would have made food softer and easier to eat. As a result, very sturdy jaws and big teeth would not have been as necessary to eat food.

Compared to all other members of the genus Homo, modern humans have some of the smallest jaws and teeth. Our jaws have become so small that many of us need to have our third molars, also known as wisdom teeth, removed.