Admixed population: a group of individuals that have mixed ancestry.

Ancestry: a person’s origin or background; family or ethnic descent.

Migration: movement of animals from one region to another.

The history written in your genome

Do you know where your family comes from? Maybe they migrated from another country. Perhaps they belonged to a native tribe that lived in the Americas. Or maybe they are originally from Africa, Asia, or one of the Pacific islands. Everyone has their own unique ancestry, but what if you don’t know where your family lineage began? Your DNA can help solve this mystery. 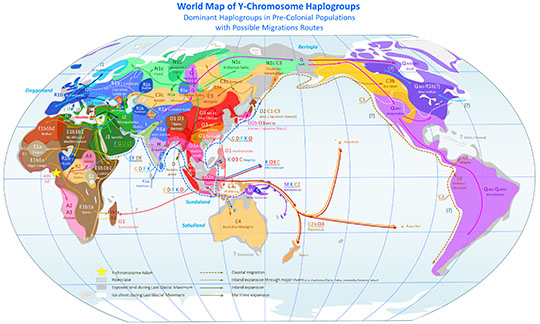 Looking at the DNA of many living people can give us more details. It reveals the history of all humans – where humans evolved and how they moved across the world. Current evidence shows that humans evolved in Africa. They then migrated out into the rest of the world. First populations migrated into the Middle East and then into Europe and Asia. Later, people in Asia migrated into the South East Asian islands, Australia, and the Americas. Finally, the Pacific Islands were one of the last areas of the world populated by people. Since this original spread of humans across the world, we have continued to move to different places. This has resulted in many admixed populations.

All of this human history is written in the genomes of people alive today. You have some of this history too. The history of your specific family lineage is written in your DNA.