Denisovan: an extinct hominin species that was closely related to humans; the only know remains were found in Siberia. ... more

Neanderthal: An extinct hominin species that was closely related to humans; Neanderthals occupied regions of Europe and the Middle East and went extinct about 35,000 years ago.

Out in the desert, an archaeologist finds the skeleton of an ancient person. They will photograph and measure the remains. Studies of this individual's skeleton can teach us a lot about the people that once lived in the area. The archaeologist isn't the only one who can study the bones, though. Geneticists are also able to extract DNA from the bones. Such genetic data can further inform our understanding of human history. 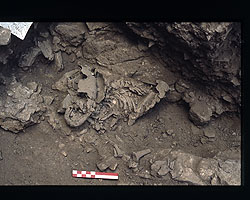 The DNA of living people can teach us a lot about our past, but the DNA of ancient people can give us more direct evidence. Ancient DNA is hard to get, though. After a person dies, his or her body decomposes. Similarly, the DNA in each cell also begins to degrade. Older remains have more degraded DNA. Sometimes ancient remains have no DNA left in them to study. However, when scientists find ancient DNA, it can provide very interesting information.

Ancient DNA does not just come from humans. It can come from any ancient skeletal remain. This includes ancient hominin species.

Neanderthals were one group of hominins. They lived alongside humans. Scientists have been able to extract ancient DNA from some Neanderthal bones. They discovered that all human populations outside of Africa share 1-4% of their DNA with Neanderthals. This means that some of the early humans from Africa bred with the Neanderthals living in the Middle East and Europe.

Ancient DNA has also helped scientists discover a whole new hominin group. These hominins are called the Denisovans. Archaeologists have only found a few Denisovan bones. These are a finger bone and a tooth. However, the Denisovan DNA is different from human and Neanderthal DNA.