Paleontologist: a person who studies fossils.

Primatologist: someone who studies the behavior and biology of living primates.

The first early human fossils were discovered in Europe in 1829.  These fossil findings excited scientists.  They wanted to understand how old these fossils were and how they came to be. More fossils were found in the following years. To this day, new specimens are also being found. All kinds of people find fossils, but it's good to recognize some of the people who have made the largest impacts on anthropology.

Over time, a diverse cast of characters has shaped anthropology and its research. 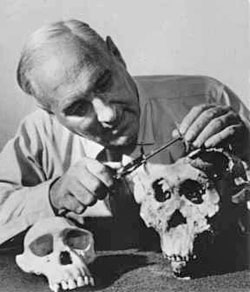 Louis Leakey (1903-1972) was a paleontologist and paleoanthropologist born in Kenya.   As a young boy, Louis found small arrowheads, which fascinated him. As a young man, Louis joined excavations in East Africa and later led trips to find fossils. One reason why Louis Leakey is important to paleoanthropology has to do with where he looked for fossils. Before Louis, many scientists thought humans first appeared in Asia. However, Louis Leakey’s discoveries showed that humans actually came from Africa. Later on, humans traveled to Asia. Louis married Mary Nicols, who became a famous anthropologist in her own right. Together they worked in areas such as Olduvai Gorge in Tanzania, where they made important fossil finds. One of the most important discoveries was of Homo habilis. This name means “handy man” because Homo habilis used tools. This early human species lived at Olduvai about 1.9 million years ago.

Richard Leakey, son of Louis and Mary, also had a knack for finding fossils and discovered his first at the age of 6. He married Meave Epps, who became a paleontologist, and together they built on the work his father started. 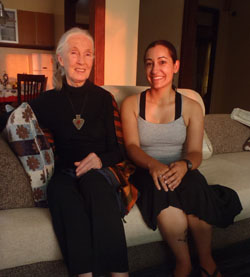 Dame Jane Morris Goodall (1934-) is British and was one of the first primatologists. She has devoted her life to studying and saving chimpanzees. In 1960, she started to study wild chimpanzees in Tanzania, a country in Africa. She saw animal behaviors that no one had ever thought was possible. She watched chimpanzees use tools, like sticks, to hunt for termites. Chimps also patrolled their ranges and attacked chimps from other groups. Jane's work was important to learn about what makes humans different from other animals. To this day, Jane raises awareness not only about chimpanzees, but also about endangered species throughout the world. There is a need for habitat conservation for all of these animals.

Many fossil discoveries have been made in the past century. In 1974, Donald Johanson discovered Lucy and in 1975, his team found a collection of teeth dated to be about 3.2 million years old.

There were 13 individuals represented in that group of fossils. Based on this, the discovery became known as the "first family". 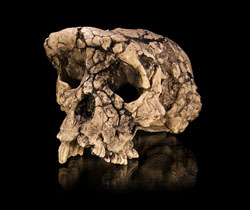 Tim White, another important paleoanthropologist, discovered the fossil named “Ardi.”  Ardi is dated to be about 4.4 million years old.

Michel Brunet is a French paleoanthropologist. He discovered one of the oldest human ancestor fossils in Chad, a country in Africa. This fossil is dated to about 7 million years ago. This was a unique find since most fossils of early human ancestors are found in East or South Africa and Chad is in central Africa.

All of these discoveries have helped to fill in the gaps about how humans evolved. However, there are many pieces of this puzzle that are still missing. As new fossils are found, we will be able to piece together our past and learn more about how we came to be the species we are today.