Places to go, fossils to find

Scientists and students with the Institute of Human Origins (IHO) at ASU travel to do their fieldwork all over the world. Here are some examples of projects:

It’s a hot, sunny afternoon in the desert of Ethiopia, and you’ve been doing survey work all day. You see some interesting layers of dirt (sediments) on a nearby hill and decide to climb to the top for a better look. At the top of the hill, you look down and something catches your eye…is that a piece of bone? And part of some teeth? You kneel down and dust off what turns out to be a jaw bone—a really old human jaw bone. 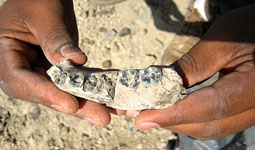 ASU anthropology graduate student Chalachew Seyoum made this find during the summer of 2013, and it is an important discovery for two reasons. First, the jaw belonged to an early member of the genus Homo (which is also the human genus), and second, it was 2.8 million years old. That is about 400,000 years older than the oldest known human fossil. What this tells us is that early human ancestors existed quite a bit earlier than we previously thought.

To watch a video and read more about this discovery, go to https://asunews.asu.edu/20150304-asu-human-fossil-discovery

Pinnacle Point is home to a series of caves that look out to the southern cape of South Africa. These caves were first excavated in 2000, and it was here that anthropologists discovered evidence of people living there thousands of years ago—specifically between 170,000 to 40,000 years ago. This evidence includes ochre, which is a pigment used like body paint.

Pigments like ochre, when used for body paint, were part of a thing we call “symbolic behavior.” Such behavior is done to express something personal about a person or their group.

The field site at Pinnacle Point also has lots of shells and signs of sea life. It appears that seafood (shellfish, whale, and seal) was a major part of the diet of the people that lived here. A site like this can keep scientists and students busy for many, many years.

For a direct link to this project at ASU: https://iho.asu.edu/research/researchprojects#modernhumans 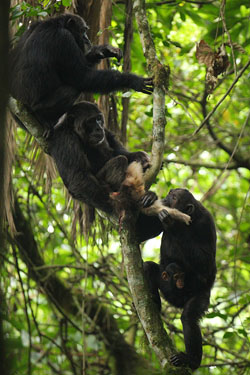 Professor Ian Gilby studies chimpanzees in Tanzania. For the past seven years, he has studied chimpanzee groups and their behavior. The behavior he has focused on most is hunting. Chimps sometimes hunt red colobus monkeys in the jungle. Dr. Gilby found that certain chimps in a group are more likely to go after a colobus monkey first. This means that these individuals then motivate other chimps to join the hunt. Dr. Gilby calls these types of chimps “impact hunters” because their decision to hunt impacts the behavior of other chimps in the group. For instance, other chimps may have the opportunity to catch other prey during the chaos of hunting. These impact hunters affect long term hunting patterns. Dr. Gilby and his team also found that when impact hunters “retire,” the hunting rates of their group often decrease.

Read more about this at https://asunow.asu.edu/20151028-chaos-or-collaboration.