Cancer: a disease caused by the uncontrolled growth and division of abnormal cells within an individual.

Illness: a disease that affects the body or mind.

Virus: a small infectious agent that relies on the cells of a host organism in order to replicate.

The genetic fight against infection

Getting a cold is never fun. Neither is the flu or when a cut on your arm gets infected. Some people deal with illness a lot more than others. But why do some people get sick a lot while others seem to never get sick? And why do different people get different illnesses? Part of this is due to your DNA. 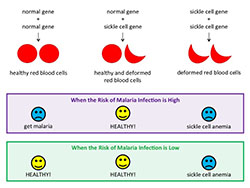 Illness is defined as a disease or sickness that affects the body, the mind, or both. Illnesses can either be caused by external factors or internal factors. A cold is an example of a disease caused by an external organism known as a virus, which infects your cells. On the other hand, cancer is an internal disease that is caused by some of your cells that get out of control.

All people can get sick from either of these factors, but people differ in how easily they get certain diseases. A person’s DNA and surroundings both help to make these distinctions. But diseases can also affect human DNA, in turn, by affecting evolution over time.

One human disease that has had this effect is malaria. This infection causes your red blood cells to burst. It was common in the past and continues to affect people today. Because of this long history, human populations have evolved some protection from infection. This is especially true of people in areas where malaria is still a problem. 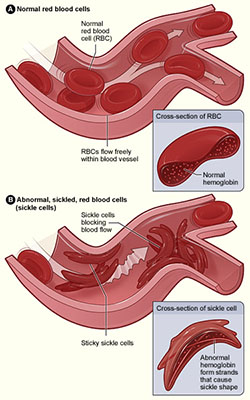 So it goes both ways—you impact which diseases you get and diseases can impact you.