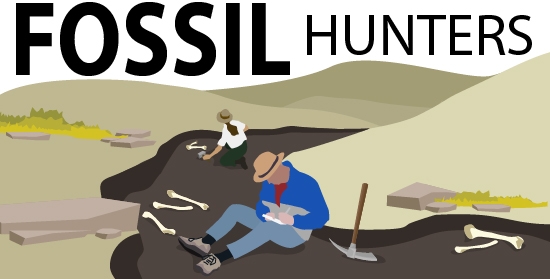 Sedimentary rock: a type of rock that is composed of fragments of rock and mineral grains of various size (clay-boulder). Some sediments are made by precipitation of minerals like salt, or from marine skeletal fragments.

John cannot control his excitement as he rides the bus to visit a natural history museum for the first time. He is only 11 years old, but he has seen many pictures of dinosaurs and other ancient animals in books. He can’t wait to see the animals’ ancient bones—especially the giant mammals and dinosaurs. 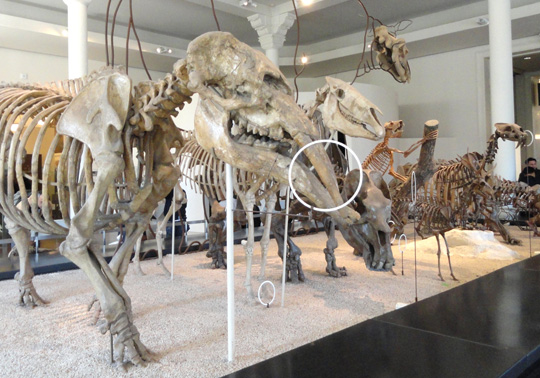 As John walks through the museum, he first encounters a mammoth—a giant hairy elephant with long, curved tusks. The mammoth is about to be pounced on by a large cat with huge knife-like canines—a saber-toothed cat called Smilodon. As John continues his walk through the museum halls, he sees all kinds of ancient creatures.

There are three-toed horses (Hipparion), a giant sloth (Thalassocnus), a giant elephant with a small trunk and two tusks on its chin (Deinotherium), and even a walking whale called Ambulocetus! Natural history museums are filled with thousands of interesting creatures that once walked on the same land we do today. For ancient animals like these to end up in museums, they first have to be preserved as fossils. 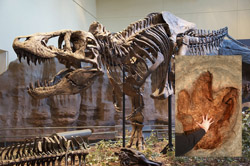 The fossils that sit in museums represent a very small number of the species that have walked the Earth. This is because most of an animal’s body is destroyed when it dies. This is especially true for soft tissues, like hair or skin, and even tiny bones. Bones and teeth are more likely to be preserved in the fossil record. Footprints, shells, and molds are sometimes found as well. For these remains or traces of ancient animals to be turned into fossils, the organism must be buried. A quick burial, little disturbance after burial, and no oxygen in contact with the carcass usually lead to a high quality of preservation. 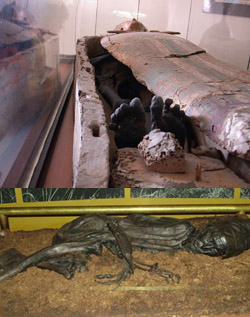 There are rare cases in which fossils are found with skin, organs, or hair preserved. In these rare cases, fossils have been found frozen in ice or encased in amber (tree sap), like the insect in the Jurassic Park movies. Humans have also found ways to preserve remains so that they are in great condition thousands of years later, like the Egyptian mummies.

Mummies can also occur naturally. Bogs and swamps have produced great fossils like the Tollund Man because of a soil called peat. The peat provides an acidic, cold, and oxygen-poor casing, which prevents the breakdown of the organism. However, most fossils are only bones or teeth that have turned to stone.

Fossil detective: On the search for fossils

For scientists, knowing what type of fossil you are searching for is the first step to finding one. Fossils can be found in many places on the Earth’s surface. However, because there is a lot of ground to cover, it is quite difficult to find them. To make it easier to find fossils, you need to know how and where to look. Luckily, there are clues all around, and a good fossil detective knows to ask the four Ws: who, what, when, and where. Who are we looking for—dinosaurs, monkeys, or ancient human ancestors called hominins? What rocks are fossils found in? When were these fossils alive? Where can we find those fossils?

Whose fossils are they looking for?

Paleoanthropologists search for hominins, our ancient ancestors who first appeared around six or seven million years ago and evolved into us, Homo sapiens. So what do we know about hominins? We know they split from their common ancestor with chimpanzees in Africa about six or seven million years ago, based on genetic studies. Also, many early hominin fossils that date to the last six million years are found in East Africa. This helps us narrow down where to find them. But East Africa is a large area to cover—to narrow it down even more, we need to look for the most likely places for bones or other traces to be preserved in the fossil record.

Fossils are found in sedimentary rocks. For bones to become fossils, they have to be preserved by being buried and undisturbed for a long time in sediments. So, we need to find areas that bury bones fast and deep underground. This includes places near rivers or lakes. 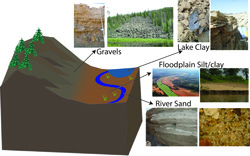 Geologists can look at sediments to determine where a lake or river was located back in ancient times. Different types of sediments give us clues as to how they were put there. For example, very fine sediments, like clays, are found at the bottom of lakes, while sands are found in rivers or beaches.

Today, scientists know that the best chance of finding a hominin fossil is somewhere in East Africa and in areas where ancient rivers or lakes could have buried them. However, these areas can be very large, so we must figure out where in these areas those kinds of sediments are found and target the ones that are the same age as the fossils we want to find.

The where and when of finding fossils 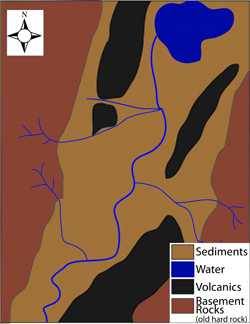 Imagine that we are on a search focusing on the hominin species Australopithecus afarensis, which lived between 3.9 and 2.95 million years ago. To determine where to look for these hominin fossils, we can use geologic maps. These kinds of maps show where different rock types are found, and they show what the rock ages are on the surface.

We are looking for near-lake or river-related sediments that are as old as our hominin, A. afarensis. To determine the age of rocks or sediments that the fossils are associated with, scientists analyze crystals that are found in the rocks or volcanic deposits within the sediments. Once we find a likely place on our geologic map, we then need to travel to that spot.

Sometimes there is no geologic map. The next best approach for finding fossils without a geologic map is to travel around and find those sediments. Going out to these areas can also give you a sense for where on the landscape will be easiest to find fossils.

For example, a very steep cliff or thickly vegetated area will be much harder to search, making it less likely to find fossils. An area with little to no vegetation, where rain can wash sediments away to expose fossils, will be a better area to spot fossils. Once we locate an area like that, we search intently by slowly walking over the land and looking for any trace of fossils. This may take a while, but if you find what you are looking for, the time and effort will be well worth it!