Basin: depression on the land usually created by subsidence, which is the slow downward movement of the ground. They are sometimes called sedimentary basins.

Rifting: when the ground (the upper most layer of the Earth called the crust) is being pulled apart, creating deep basins, like open wounds on the Earth’s surface. They mostly get filled up by sediments and volcanic rocks.

The best part of rain may be the puddles. Water gathers in small bodies of water that tempt anyone who sees them to jump in and cause a splash. You may have noticed that puddles are located where there are low parts in the ground. These are very small examples of basins.

Basins are low-lying places like valleys that are created by the slow downward movement of the ground. Because they are like bowls that have room to hold water, basins fill with sediments from lakes and rivers that are in nearby higher areas. Basins are great places to start looking for fossils for several reasons. 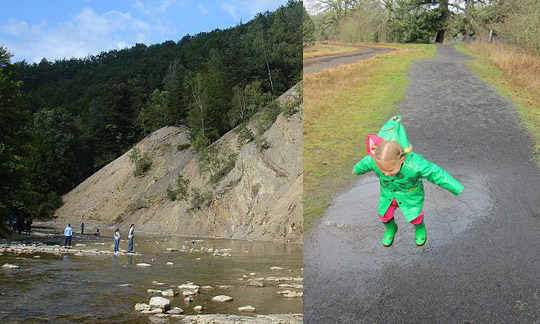 First, the valleys fill up quickly with sediments. This means anything, like bones, left on the surface gets buried deep and protected. Traces or remains of creatures that are buried fast and deep have a better chance of being preserved as fossils.

Second, basins are locations where lakes and rivers are found. Every living creature needs water to survive, so where there’s water, there’s life.

Third, where there are lakes and rivers, there are also usually lots of plants, an important food source for animals and humans. The more living creatures in a spot, the better the chance of something or someone being fossilized.

We have learned a lot about human origins from the many hominin and animal fossils discovered in Africa. Most of these hominin fossils are found in East African basins. These basins were created by rifting. Rifting is when the Earth’s upper layer (the crust) moves in opposite directions. This pulling apart motion creates low-lying spaces we call basins, which get filled up with sediments that travel down from higher elevations.

One of these hominin fossils is Lucy, a specimen of Australopithecus afarensis that lived 3.2 million years ago in Hadar, Ethiopia. Lucy was one of the most complete hominin skeletons found and has contributed a lot to our study of how humans evolved.