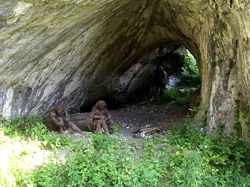 Caves can seem like dark and mysterious places. Places that hold secrets. Some caves do. They can hold secrets of past inhabitants as far back as millions of years. You may come across a cave at some point. If you do, think about what secrets that cave might hold. Did it provide shelter for some creature? What lived in there and how did it use the cave? But be careful in your cave search… you wouldn’t want to walk inside a cave that is currently occupied by some animal.

Caves are hollow spaces in rocks created by wind, water, or rock falls. They provide shelter for animals or a good hiding place. If sealed off correctly, caves also provide great environments for preserving what gets trapped inside. By sealing off from the outside, caves protect what’s inside from the rain, wind, or anything else that can destroy remains or traces of past life. 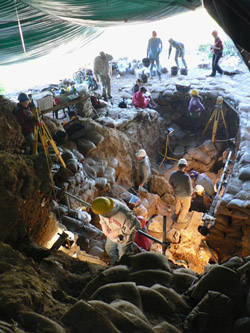 Caves have helped scientists learn more about our history. We have discovered that ancient people used to live in caves, draw on cave walls, and they even buried their loved ones in caves. In South Africa, artifacts and fossils are found in caves—like at the site of Pinnacle Point on the coast of South Africa. We also know animals would take their food into caves and sometimes left behind the bones, which then became fossils.

Several cave sites in South Africa contain hominin fossils collected by carnivores, like Sterkfontein and Kromdraai caves. Anthropologists know that these hominins fossils were left there from carnivores due to tooth marks on the bones. We also know ancient humans drew because caves preserved their artwork. For example, there are preserved cave paintings at Laas Geel in northern Somalia or the Cueva de las Manos (Spanish for “Cave of the Hands”) in Argentina. Caves can be dark and scary, but can also hold secrets that shed light on the history of life.