Lake cores unearth the past 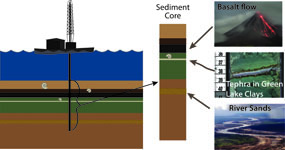 A group of scientists stand on a large platform in the middle of a lake as they watch and help the drill rig workers pull up a long, muddy pipe. They are drilling a pipe deep into the lake bottom and pulling up cores of lake sediments that store a great deal of information about the past.

Wind and rivers carry sediments and other particles, like pollen, to lakes. Once the sediments and particles fall to the bottom, the water acts as a barrier from winds or other physical processes that would disturb them. Because of this, sediments are preserved in lakes at a very fine scale. This allows scientists to get a high-resolution record of ancient environments. 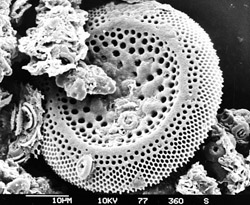 Lake sediments often contain small fossils. These include fossils like shells, similar to the ones you see on the beach, or fossils of tiny organisms that live in the water. The presence or absence of these fossils can tell us what the water and lake were like. This includes how deep the lake was, its temperature, and if its water was salty or fresh. The types of sediments in cores, like sands or clays, can tell us when the lake shrunk (during times with drier climate) or grew (during times with wetter climate). All of this information helps scientists figure out what environments and climates our ancestors lived in.

A region in the deserts of northeastern Ethiopia once held Lake Hadar. Lake Hadar was filled with water 3 million years ago, and was a source of water and food for many animals and hominins. Collecting cores of Lake Hadar’s sediments, a project that is ongoing, will provide a more detailed record of the ancient lake. 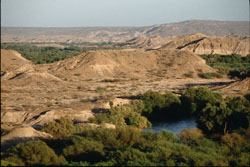 Hadar’s lake sediments and fossils can tell us what the climate and environment was like. This information helps us answer a series of larger scientific questions including: 1) How did the Hadar environment vary over time? 2) Why did Australopithecus afarensis disappear from the fossil record ~ 2.95 million years ago? and 3) What was the role of environmental change in the origin of Homo?