Habitat: the environment of a species that includes both living and non-living elements.

Paleoecology: the study of the ecological context of fossil species. ... more

Paleontological: related to the study of fossils.

Taphonomic bias: the tendency for only certain materials to be preserved well, causing a skewed view of a fossil assemblage; for example, small bones are less common in the fossil record because they break down more easily.

Taphonomy: the study of the processes that affect an individual from the time of its death until its discovery as a fossil.

Jump into your time machine and zip back to East Africa, three million years ago. Upon jumping out of the time machine, you pull out your binoculars and notebook and start counting animals. You see 20 antelopes, ten giraffes, five leopard-like cats, but only one human ancestor. Sadly, paleoecologists may never get to ride in a real time machine. However, they can use the number of fossils found at paleontological sites to learn how common certain species were in ancient landscapes. 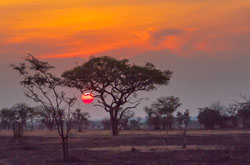 Early humans are often the rarest type of fossils found at paleontological sites in East Africa. In fact, at most hominin sites, animal and plant remains are most common. These include fossils of antelopes, giraffes, elephants, wood, and pollen. Such fossils are helpful to paleoecologists, as they use these remains to learn about the habitats of our early ancestors.

Learning what ancient habitats were like at these fossil sites is important. It helps us understand how the environment may have influenced our evolution. It also helps us come up with questions about the evolution of anatomy, ecology, and behavior in early humans. 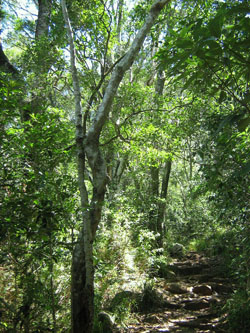 Mammal fossils are especially useful to learn about ancient habitats. Most mammal species are habitat-specific, meaning that they are only found in one or a fewer types of habitat. For example, wildebeest are only found in grasslands, but monkeys are mostly found in woodland or forest. Knowing which habitats each mammal species lived in allows scientists to use them to learn about ancient habitats.

So, let’s use Hadar, Ethiopia, the site where the famous fossil bones of "Lucy" was found, as an example. There are three fossil-bearing layers of dirt, or sediments, at Hadar. From bottom to top, or oldest to youngest, they are: the Sidi Hakoma, Denen Dora, and Kada Hadar. We can use the fossil bones of mammals from each of these units to reconstruct the habitats of Lucy’s species (Australopithecus afarensis) and how the habitats changed over time. Lucy is from the youngest rocks at Hadar, the Kada Hadar, but there are fossils of her species from the other layers as well.

The bottom layer of Hadar, the Sidi Hakoma, has lots of fossil bones from giraffes and monkeys. There are also a lot of bones from antelopes that would have lived in woodland and forest habitats, like kudu. All of these mammals suggest that the Sidi Hakoma had lots of trees and was probably a mixture of woodland with some patches of forest. 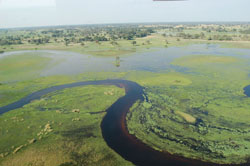 In the middle layer of Hadar, the Denen Dora, fossils of water-loving antelope and grazing (grass-eating) mammals are most common. There are also lots of hippo bones. These types of mammals tell us that the Denen Dora had open, wet habitats—maybe marshes or grasses around a big lake. A good example of this habitat type can be found in the Okavango Delta in Botswana today.

The top layer of Hadar, the Kada Hadar, is full of fossils of antelope, which would have lived in grasslands, like wildebeest and gazelles. Other open-habitat mammals, like the warthog-like pig, Metridiochoerus, are common. Thus, it appears that Lucy’s species is last found in the sediment layer at Hadar that had a mixture of grasslands with some trees, sort of like the modern Serengeti in Tanzania.

Taken together, the fossils of these mammals show us that Lucy's species lived in a great variety of habitats. Australopithecus afarensis could be found in a mix of woodlands, swamps, and grasslands through time.

Three million years ago, a monkey died and fell down from a tree onto the ground. That night, hyenas came along and ate some of the carcass, removing the monkey's back legs. Then, in the next week, a stampede of wildebeest came along and trampled the remaining monkey skeleton. The thin, fragile bones of the skull were shattered, so all that was left of the skull were the teeth. During the next heavy rain, these teeth floated away from the tree and out onto the floodplain by the river. This is where they were buried and fossilized.

Three million years later, a scientist walks along a dry riverbed in Ethiopia, at Hadar, the same site where Lucy’s bones were found. She spots the glint of a small monkey tooth in the rock, and then another. Three million years after the monkey’s death, all that can be found of it are two teeth. 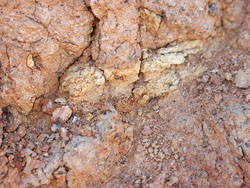 The story of our poor monkey reminds us that fossils sites may not preserve all of the plants and animals that lived with early hominins. For example, fossils of rodents (like mice and rats) are often rare or completely absent from fossil sites. Pollen may or may not be preserved, so we might have to reconstruct habitats without plant remains. Why does this happen? What are the processes that determine this? The answer to these questions lies in the science of taphonomy.

Taphonomists are scientists that study the processes that affect an organism from the time it dies until it is found as a fossil. By understanding taphonomy, we can estimate "taphonomic biases." It is important to estimate taphonomic biases because they may skew our views of how common animals were on ancient landscapes. This can lead to an inaccurate habitat reconstruction.

Knowing the abundance of different types of extinct mammals allows us to reconstruct the habitats of our earliest ancestors. However, sometimes we are interested in other questions—what exactly did fossil mammals eat? What can plant remains tell us about early human habitats? How did the evolution of new behaviors in early humans affect other mammals that lived in the same habitats?