Gamete: a reproductive cell in multi-cellular organisms that reproduce sexually.

Silica: a hard compound that is sometimes absorbed from the soil by plants like grasses. 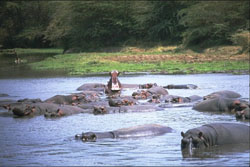 Zebras eat grasses at the edge of a lake as a hippo wades through the shallows, surrounded by lily pads. Crocodiles sun themselves on a nearby peninsula bank where a family of elephants passes by through the sedges. On the edge of the lakeshore, near a patch of palm trees, a group of hominins butchers the remains of an antelope with stone tools.

This might be the scene you’d see if you were in Olduvai Gorge, Tanzania, 1.8 million years ago. We can reconstruct this ancient landscape in such detail thanks to mammal fossils and paleobotany. While some sites don’t have many plant remains, Olduvai Gorge does. There are three major types of plant fossils found at Olduvai Gorge—pollen, phytoliths, and macrofossils.

Pollen is the powder-like gamete of plants that drifts through the air during the spring. You may be more familiar with pollen than you’d like to be, as pollen allergies are common. However, fossil pollen is a great tool for people interested in ancient landscapes. Every plant species has a special pollen structure. Because of this, scientists can look at pollen samples under a microscope and identify them by species. 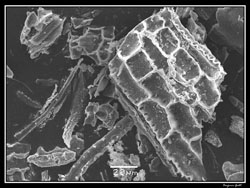 Phytoliths are tiny structures found inside of plants. They are made of silica and are therefore pretty hard. The word “phytolith” actually means “plant stone.” Because they are so hard, phytoliths preserve well in the fossil record. They are also specific to certain types of plants, which helps scientists figure out what kind of plants were around in an area. Sometimes the teeth of our ancestors have phytoliths in between them, like when you get lettuce stuck in your teeth after eating a salad. We can use the phytoliths stuck between our ancestors’ teeth to identify what types of plants they were eating.

Plant macrofossils are indeed what their name means—“large fossils.” Plant macrofossils include things like leaves and wood. For example, scientists have used fossil wood from Olduvai Gorge to learn that the landscape once was covered in palm trees. Remains of a plant’s roots are sometimes also preserved; these are called “root casts.”