Browser: a species that eats mostly leaves and other parts of woody plants.

Carbon isotopes: atoms of carbon that have different numbers of neutrons; isotopes are sometimes used to determine the diet of mammal herbivores by analyzing the carbon in fossilized teeth. ... more

Grazer: a species with a diet that is mostly grass.

Mesowear: a method to determine the diet of mammal herbivores by assessing how sharp or how blunt their tooth cusps are.

Microwear: microscopic scratches on teeth that can be used to determine the diet of mammal herbivores.

Mixed feeder: a species whose diet consists of both grasses and leaves, more or less in equal quantities.

The diets of fossilized herbivores

Zebras munch on grasses as the sun is setting. Nearby, a giraffe is plucking leaves off a tree in the woodlands bordering the grassland. An elephant ambles through the woodland, passing the giraffe. She picks leaves off the trees on her way out but then begins eating grasses alongside the zebra. 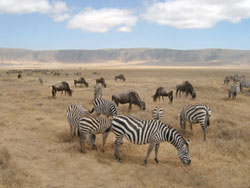 Herbivores, or plant eaters like zebras, giraffes, and elephants, are often the most common fossils at hominin sites in Africa. Herbivores are dependent on local vegetation—grazers like zebra need grass, and browsers like giraffe need woody vegetation, like leaves. Some herbivores, like elephants, eat both grass and leaves and are called mixed feeders. So, knowing what each herbivore species ate can give scientists a rough idea of how much of an ancient landscape was covered by grasses versus trees.

Scientists have come up with many methods to investigate the diets of ancient herbivores. Two of these, microwear and mesowear, look at tooth wear.

Microwear is a method that uses the microscopic scratches on teeth to understand the types of plant food that the herbivores ate. Teeth with the most scratches suggest an animal that ate a lot of abrasive foods, like grasses. Grasses are abrasive because they have silica, which are sort of like microscopic rocks. Mesowear involves looking at herbivore teeth from the side and seeing how sharp or blunt each tooth is. Teeth that are more blunt suggest grazing, and sharper teeth suggest browsing. Again, blunt teeth are caused by more abrasive foods, like grasses. 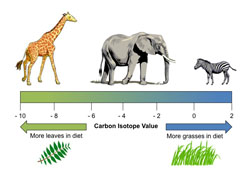 Carbon isotopes rely on the old adage, “you are what you eat." Trees and grasses differ in how they take up carbon, and we can tell this chemically by looking at isotopes of carbon in the plant. When herbivores eat plants, the carbon from the plant becomes part of the make up of their bodies, including their teeth—so we can look at the carbon isotopes in teeth to tell what ancient herbivores ate. To do that, a scientist drills into a fossil herbivore tooth and collects some tooth material. This is then prepared and analyzed in the lab to get a single carbon isotope value. Basically, the lower the value is, the more leaves the animal ate. The higher the value is, the more grasses an animal ate.