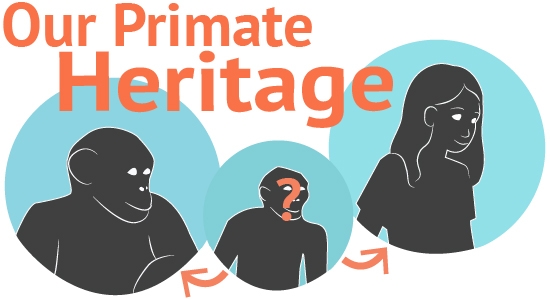 Catarrhine: monkeys and apes that have dry noses with downward-facing nostrils. Other than humans, these primates live in the Old Word.

Haplorhine: a group of primates that have dry noses and tend to be diurnal.

Olfactory lobe: the part of the brain that processes smells.

Phylogenetic tree: a branching figure used to depict the relationships between animals.

Platyrrine: monkeys that have dry noses with sideways facing nostrils. These monkeys live in Central and South America.

Strepsirrhine: a group of primates that have wet noses and are typically nocturnal. Both lemurs are lorises belong to this group. 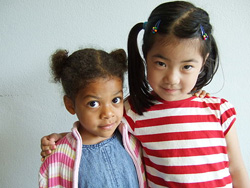 Look at your mom or dad. Maybe you have the same color eyes and skin or perhaps the shape of your nose and ears are the same. You may even look a little like your cousins. You and your family share traits because you are closely related; you share similar genes. You are more distantly related to non-family, like your friends or your neighbors. Therefore, you should share fewer traits with friends or neighbors.

In the same way you share traits with your family, all humans share traits with other apes and with monkeys. This is because humans are primates and we are more closely related to all primate species than we are to any other group of animals living today. These relationships can be depicted in a tree form, much like a family tree. Scientists create these phylogenetic trees to show relationships between living things. 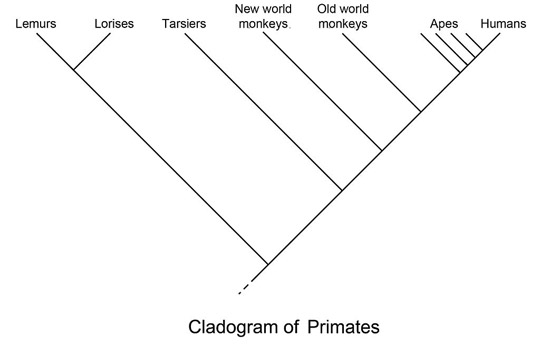 All primates have large, forward-facing eyes that can see in color. We also possess opposable thumbs with nails instead of claws, which allow us to easily grasp things. Compared to other mammals, primates have relatively larger brains. There are many different types of primates, each with their own unique traits. Understanding the primates that are alive today can help scientists understand how we evolved.

There are many different types of primates living all over the world. Some live in Africa, others in Asia, and there are more in South America. Scientists divide these primates into groups. Species within these groups look and behave differently. 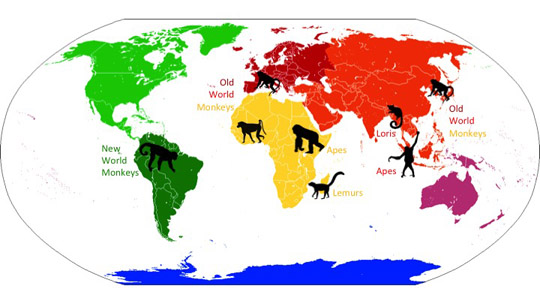 Lemurs and lorises are more closely related to each other than to other primates and belong to the group called Strepsirrhini. Lemurs only live on the island of Madagascar while lorises live in Southeast Asia. They share many characteristics such as greater reliance on their sense of smell. Because of this they have longer snouts, wet noses, and relatively larger olfactory lobes in their brains, kind of like your pet cat or dog. Strepsirrhines also possess a unique feature called a dental comb. This comb is formed by the lower incisors and canines and is used for grooming friends and relatives. This group of primates tends to be nocturnal, meaning they only come out at night.

Humans belong to the group called Haplorhini. Along with our other relatives, such as gorillas, spider monkeys, baboons, and tarsiers, we rely less on smell and we have dry noses. Most haplorhines are diurnal, or come out during the day. Haplorhines also possess relatively large brains among primates. This group can be further split into New World monkeys, Old World monkeys, and apes.

New World monkeys, or platyrrhines, live in Central and South America. Their nostrils are typically far apart and point sideways. Some members of the group have prehensile tails, or tails capable of grasping. 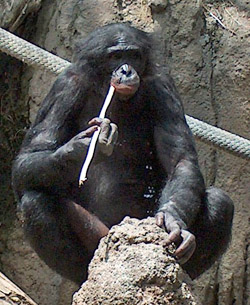 Old World monkeys and apes are called catarrhines and live in Asia, Africa, and Europe. Catarrhines have nostrils that are close together and point downward. Old World monkeys include baboons, macaques, mandrills, and guenons. Apes have even larger brains but they all lack tails. They also have very mobile shoulders for moving through the trees. Humans are apes. Our closest living relatives are the chimpanzees and bonobos. Though their brains are smaller than ours, chimpanzees can create and use rudimentary tools.

As humans, we have several unique characteristics that separate us from all other primates. We have very large brains. Our brains are bigger than all other living primate brains and, in relative terms, larger than all other mammals. We use our big brains for complicated cognitive tasks. We can understand the intentions of another being, or what someone else may be thinking. Though it may sound simple to you, this capability has yet to be proven in any other species.

Humans are also unique in that we are bipedal, or we walk on two legs. The exact reason for the evolution of this trait is still debated. However, it clearly separates us from all other primates. These anatomical traits are important for understanding the evolutionary relationships between species as well as how these species behave.

Read more about Our Primate Heritage