Opposable thumb: a thumb that can move and bend to touch all of the other fingers, enabling grasping.

If you are causing trouble, someone might tell you to “quit monkeying around.” Humans are not actually monkeys, but both humans and monkeys belong to a group of mammals known as primates. 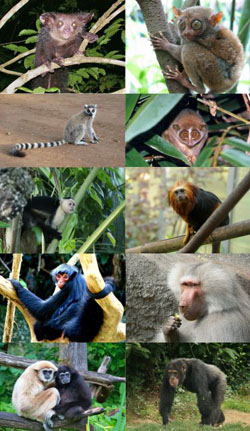 Primates have big brains, long lifespans, opposable thumbs, and usually opposable big toes. These traits make primates unique. Humans are a little different because we have lost this last trait.

Scientists used to think that nonhuman apes and humans evolved separately. But DNA comparisons disprove this idea. In fact, chimpanzees and bonobos are more closely related to humans than they are to any other ape species. This means we are each other’s closest living relatives.

As anthropologists, we think human and nonhuman primates are pretty cool. We have a bias toward only studying primate genomes. This is important for finding our exact place in the tree of life. However, we also need to consider the larger tree. We cannot forget the other mammals, vertebrates, animals, and non-animals that we are related to. Only then can we truly find our home in the tree of life.